-Adds a few palm trees to the west end of sky harbor, papago park, midtown,downtown, and arcadia. Unfortunately, there is no real analog for the type of palm trees we have here in Arizona. There is no 50 foot stick with 4 sickly looking palm fronds so I had to use a combination of Palm_Tree and Date_Tree. The biomes have a mind of their own so there are a few issues here an there with sizes and types. The SDK is WYSIWYG to a certain exent but wierd stuff happens when messing with AI vegetation.

-Fixes transitions in San Tan Mountains and north of 101 near Scottsdale.

-Adjusted cactus density over most of the map favoring less density.

-Did a lot of de-vegitating in Midtown, Downtown, Arcadia, and Paradise Valley. I focused on the approach paths to Sky Harbor this time.

-Devegitated all of the valley airport ramps and taxiways including Sky Harbor, Chandler, Falcon, Mesa-Gateway, Glendale and Deer Valley, I did not realize what a problem it was until I started flying around.

The Arizona vegetation biome has always been neglected in every flight sim since...well ever.  Every addon I have ever bought that was supposed to fix how Arizona looks left me disapointed...Yes even that one very popular tree mod...  I decided I would fire up the SDK and Youtube and learn to fix it. So after 90 hours and 3 weeks worth of dawing hundreds of polygons and defining vegetation biomes for the Southern AZ area I have what I feel represents Phoenix pretty well.

The odd thing is that Asobo created the cactus biome but then used the cactuses everywhere they don't go in real life.

This mod covers from Black Canyon City in the north to Casa Grande in the south.  White Tank Mountains in the west to Roosevelt Lake in the east.

Just some points of the points of interest that now look much better. Tempe, Papago Park, South Mountain, Camelback Mtn, Piestwa Peaks, White Tank Mtns. Sierra Estrella, San Tan Mtns, Sacaton "Pass" on I-10. Canyon Lake, Lake Pleasant, Bartlett, Saguaro, Horesehore--- all the lakes.  I exposed the marinas at all the lakes. The buildings are Blackshark AI I did not control them but Blackshark did an okay job so I left it.  Lake Pleasant needed a significant rework, its not perfect but it is much better now.

Everything I did is too extensive to list, it's pretty detailed.  Just hop in something low and slow and go enjoy the valley of the sun and beyond the way it was meant to look.

Works with or with out photogammetry but was designed for use with photgrammetry.

I do not know how it will behave with seasons and other tree mods. Try it out and let me know. This file is very simple its just a lot of biome defintion polygons and exclusions so nothing can harm your system. My gut feeling is that is should override any other mod and look like it does in the screen shots.

Frame rate impact is negligable, if any

The result is not perfect, the bushes are too big and numerous compared to the saguaros so I had to find a happy medium. When you increase the density it makes more bushes so it's a balancing act. 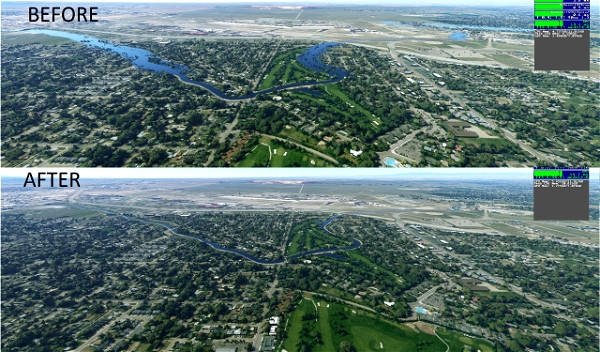 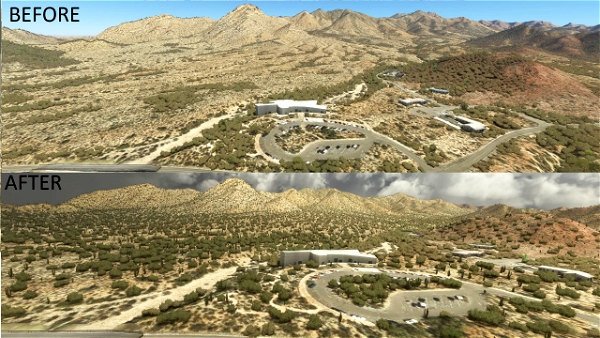 This is wonderful. Were you able to fix the palm trees in Phoenix? Seems like Osobo reads the palms in the southwest/California and creates a green Monolith type structure. It does a fine job at crating Palms in the tropics but the Sourthwest seems to be neglected

No, the problem is that the palm trees are not natural and are planted in the urban areas which means there is always photogrammetry and I have tried to precisely place palm trees but with photogrammetry it looks weird. Also, they tend to be in dense areas and tightly packed in rows. In some areas like downtown Phoenix and Tempe I have de-vegetated but the palm trees look like pencils with green erasers. The southwest has been very neglected, that's why I took on this project. I am working on de vegetating all the airports and doing a bit finer work in many more places.