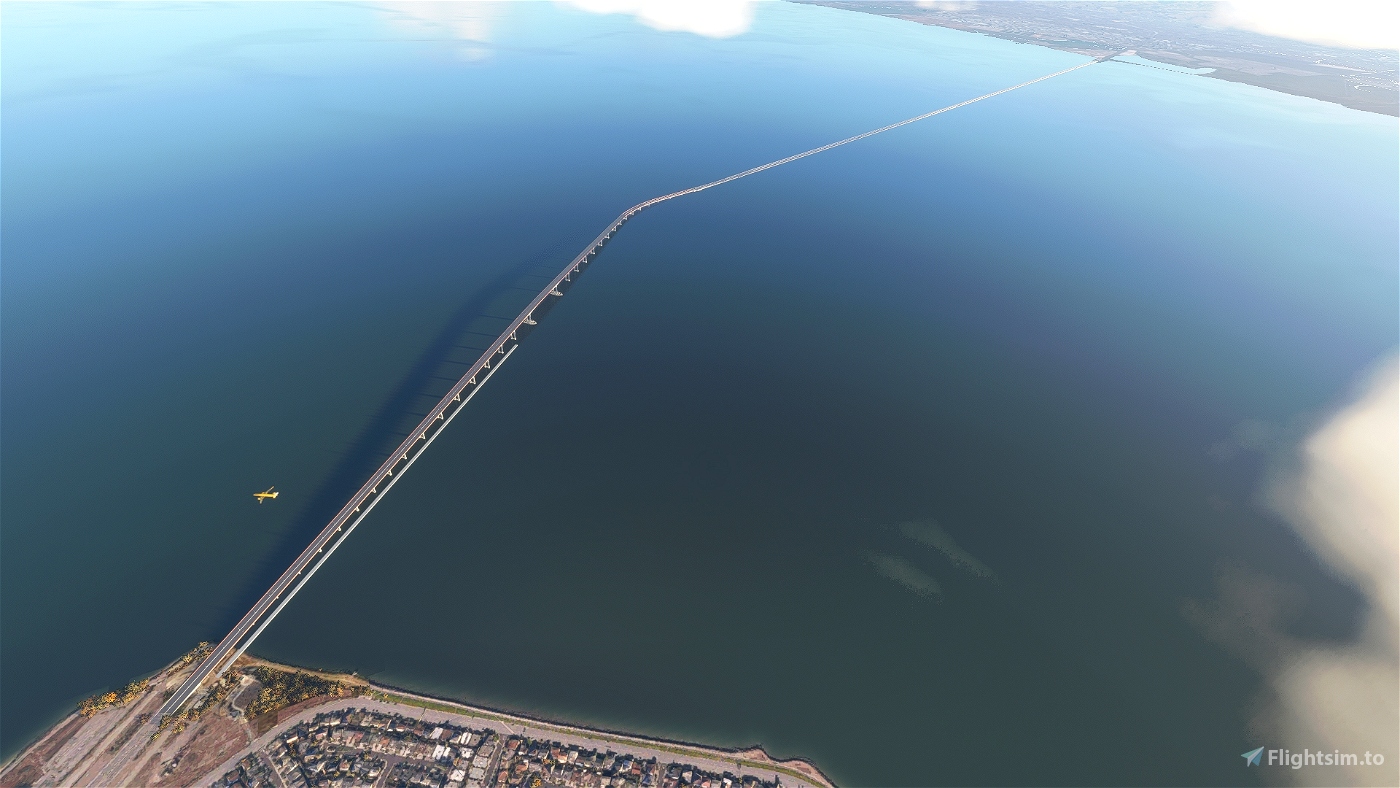 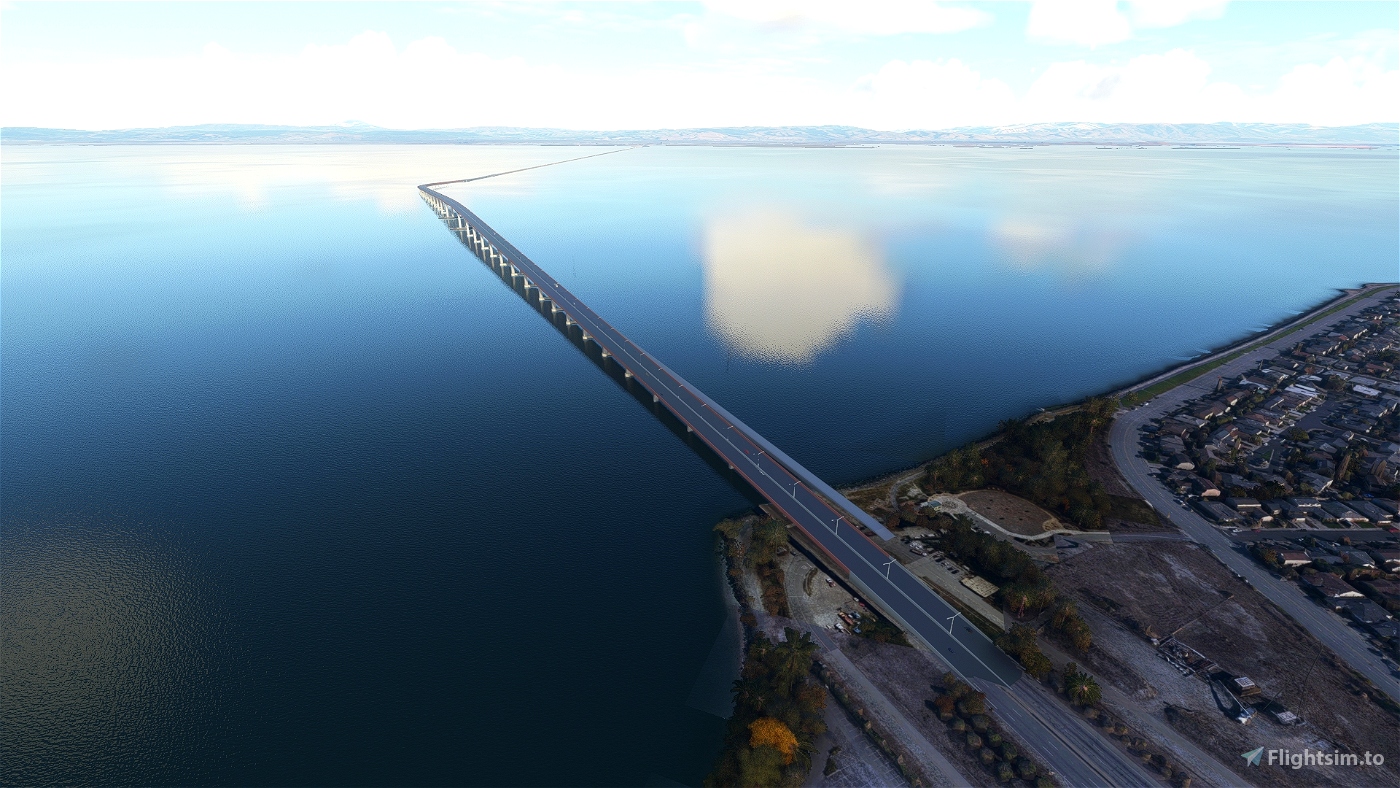 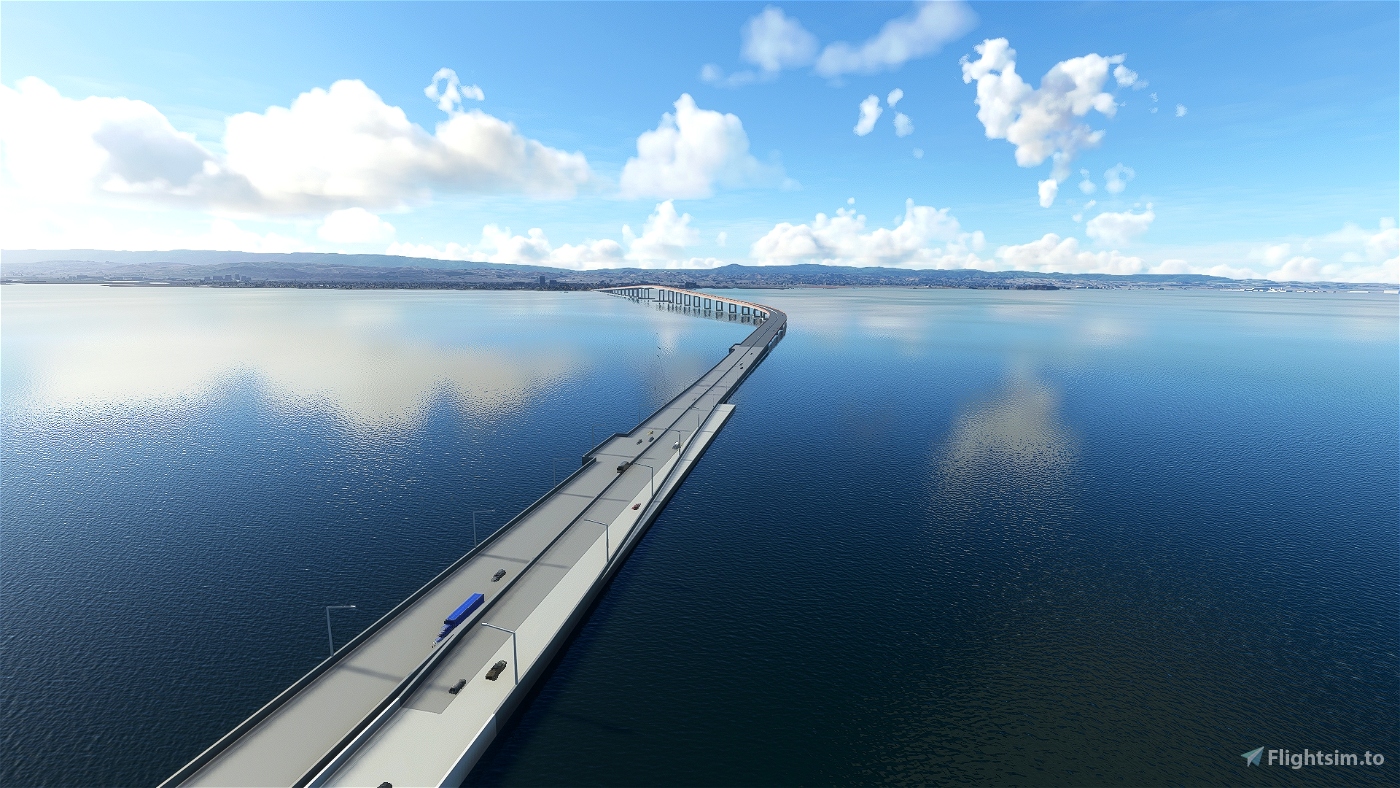 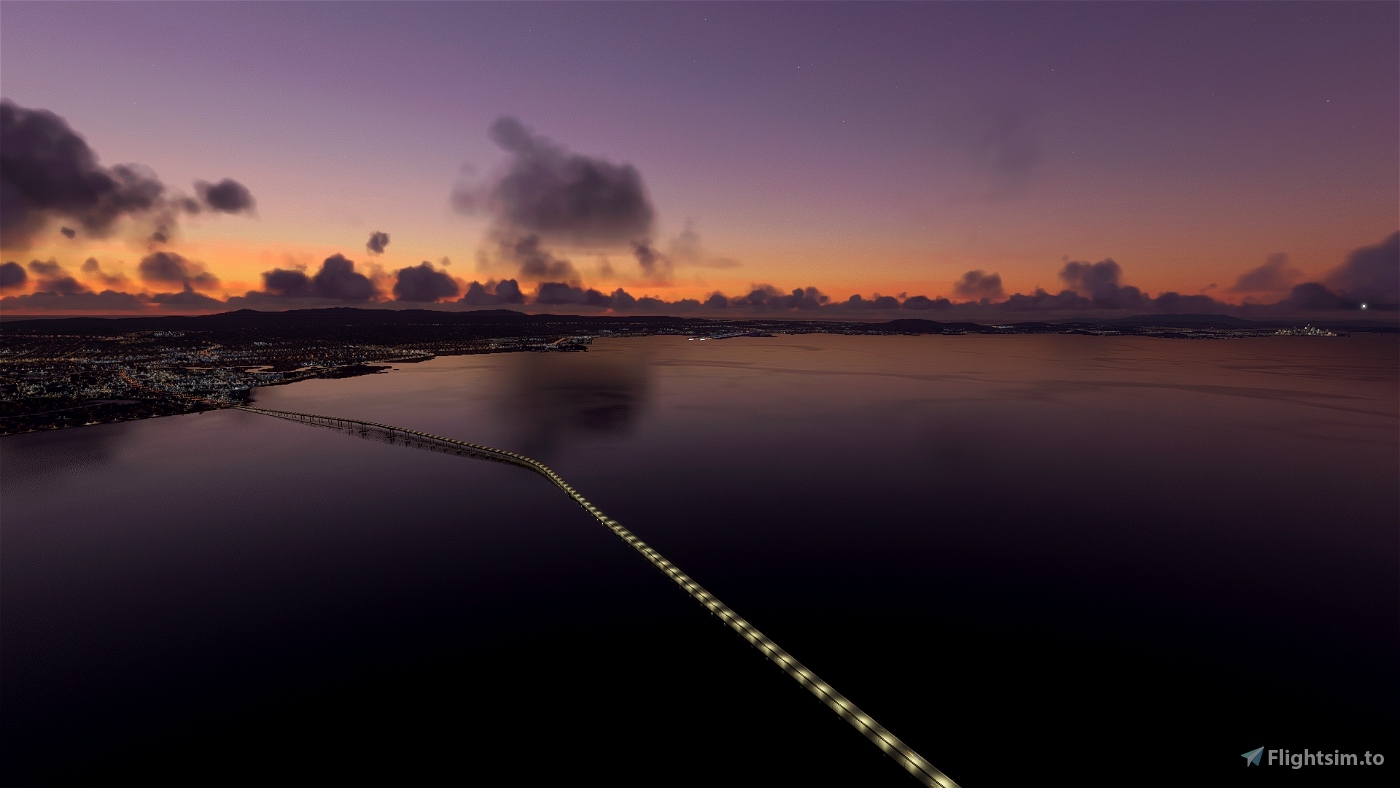 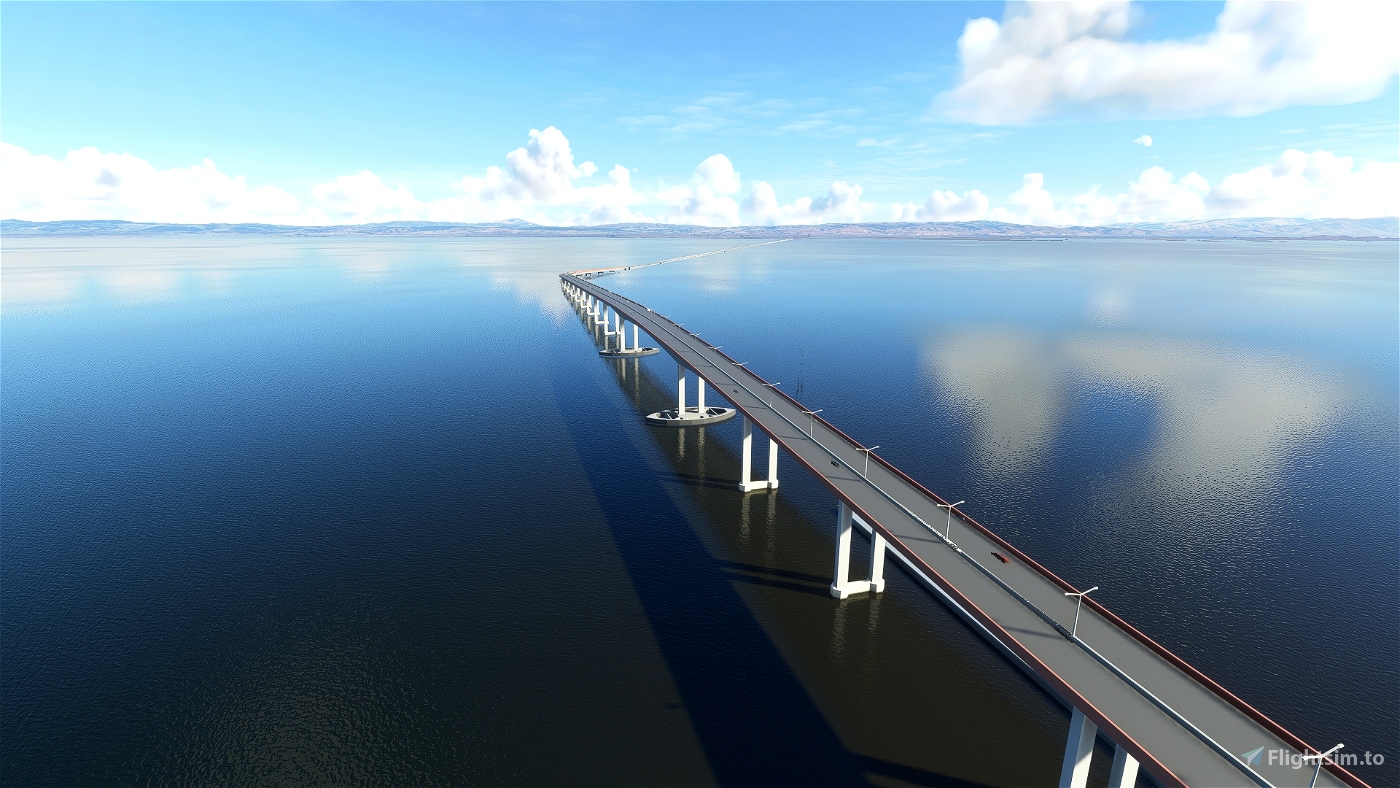 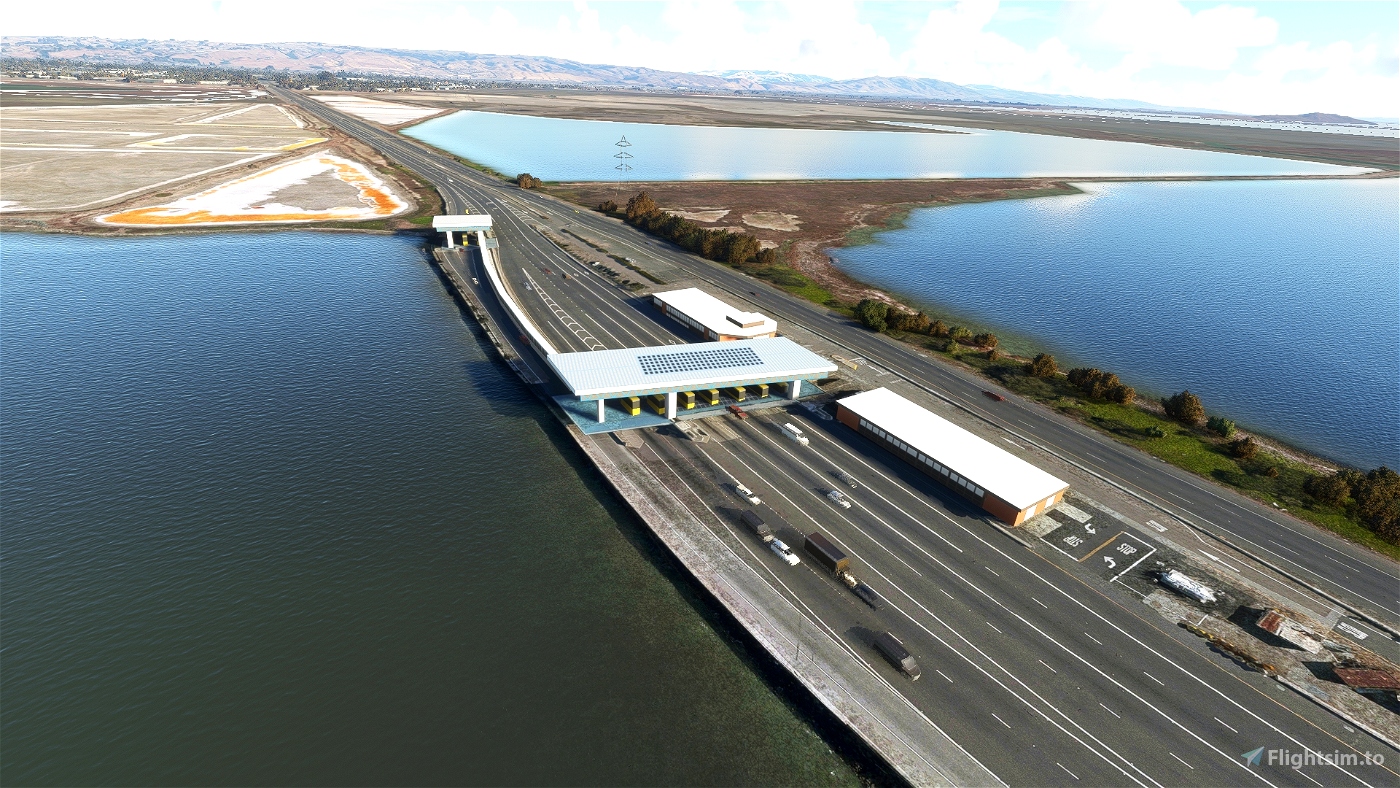 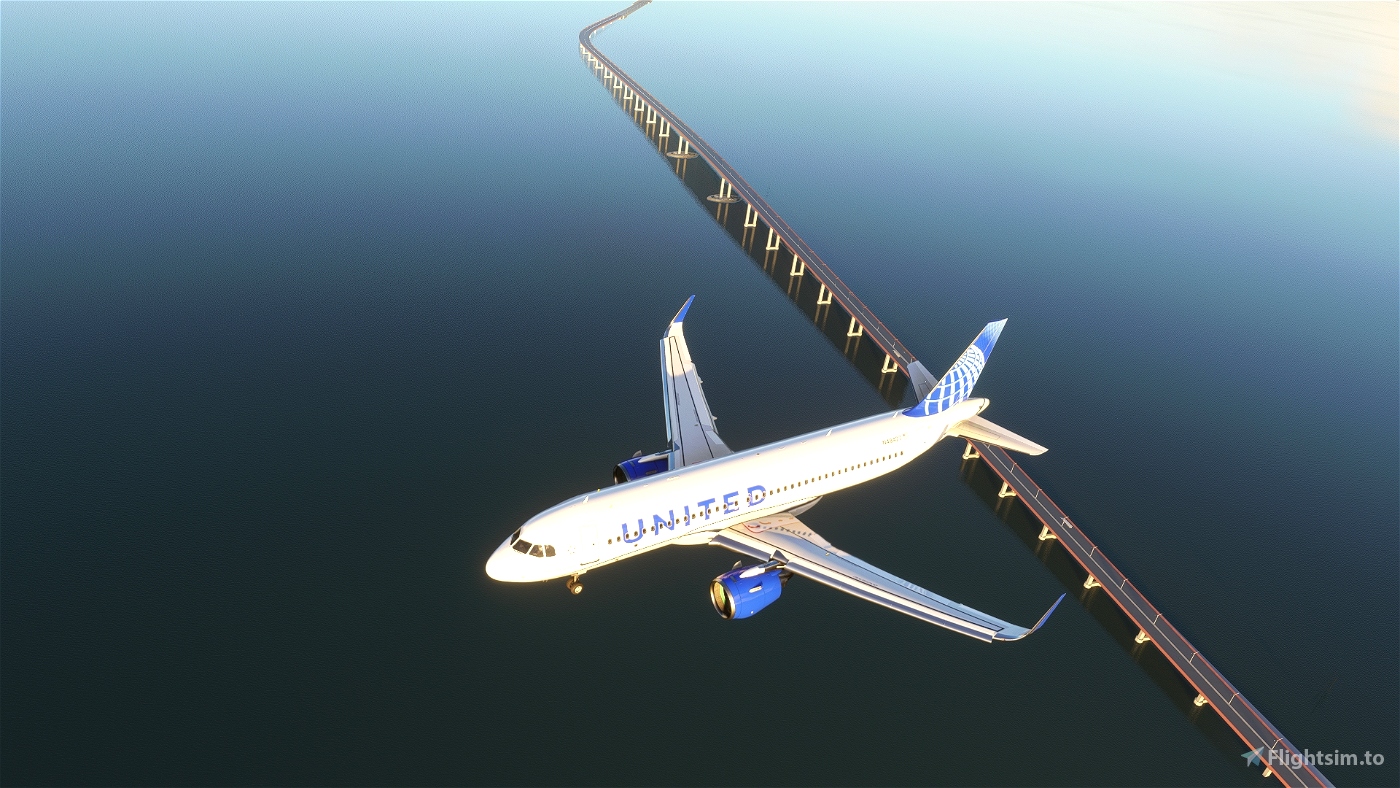 The San Mateo–Hayward Bridge (often referred to as just the San Mateo Bridge) is the longest of the highway bridges that span San Francisco Bay; in fact, it is the longest bridge in the state of California, and currently 25th longest in the world, at 7 miles total. The bridge is a combination of a 2 mile long 'high-rise' section opened in 1967, and a 5 mile causeway trestle whose original construction was in 1929. The bridge crosses San Francisco Bay between the cities of Foster City and Hayward, carrying California State Route 92.

The bridge is a important visual landmark for pilots flying in the Bay Area, particularly on approach to San Francisco International Airport, where it is used as a landmark in the charted visual approaches to Runways 28L and 28R.

- Some light terraforming and vegetation tweaks around the bridge ends.

- This is the second of a few forthcoming bridge addons I'm working on for the Bay Area, since the default scenery still lacks proper models for everything except the Golden Gate and Bay Bridge. For those following along, Richmond - San Rafael is the next one planned.

- Download the ZIP file and extract the "whitearcades-sanmateobridge" folder to your Community folder:

Other Scenery By Me

Other than that it's mostly amusement parks, but if you're into that...

Buy me a coffee

Well done! Any Just missing the electrical towers, but as a pleeb myself, I approve 100%

I think *technically* the power towers are present as default objects, but they're extremely hard to make out (and there's no power lines strung between them in any event). I know that was the case for the Dumbarton bridge, but I didn't look too hard for the poles on this one. Might take a stab at modeling them for a future update at some point.

this is better than nothing. I just have vivid childhood memories of my parents taking us to SFO and me wondering if the electrical towers would kill us if it rained LOL. I appreciate your hard work. This is great!

you do great work, Thank you

Awesome, thanks, much needed.

Please note that we can only process copyright infringement notifications if they come from the rightful copyright holder or his legal representative. Law prohibits us from processing third-party requests if you are not the owner or copyright holder of this file.

We need additional details about the allegedly infringing content. The more details and the more accurate, the faster we will be able to process your report. We kindly ask you to understand that we cannot process copyright requests through this form, as we are required to receive such correspondence in the form of a formal complaint via email, signed by your first and last name.

Please note that it is not enough to say that a file has been stolen. We need precise and accurate proof of the infringement.

Your E-Mail must contain this information:

Please send your letter with all required information above to this address:
[email protected]